With about 2 million viewers each week the Andrew Marr Show is certainly in the top of Britain’s politics programmes. The following is a collection of personal tweets from this morning’s show, when I had the amazing opportunity of watching all the action behind-the-scenes.

END_OF_DOCUMENT_TOKEN_TO_BE_REPLACED

Barney Jones, the Editor of ‘The Andrew Marr show’ and previously Editor of ‘Breakfast with Frost’, shared his unique experiences of producing such well-known shows at a Coventry Conversation on the 13 th October 2011.

Mr Jones started off by talking about the very well received; ‘Breakfast with Frost’ which started in 1993 and was hosted by Sir David Frost and he went on to mention that they had to argue about the title and Mr Jones said: “David was very keen that it should have his name in it” and referred to some of the other programs which Sir David Frost hosted and how many had his name in the title. He then joked that this was so they couldn’t replace him with another presenter.

Mr Jones showed the lecture audience some clips from ‘Breakfast with Frost’ and as he came across one with some of the cast and production team he pointed out Sir David Frost and also himself and smiled as he said: “A youthful editor.” Mr Jones talked about some of the huge names they had on ‘Breakfast with Frost’ and in the fourth show they managed to get George Bush Senior who was at the time, President of the USA. He said that he was shocked the way that Sir David Frost just took a number out and rang the President whilst sat at his desk. He described himself as being “Flabbergasted.”

END_OF_DOCUMENT_TOKEN_TO_BE_REPLACED

A Night of TV Drama 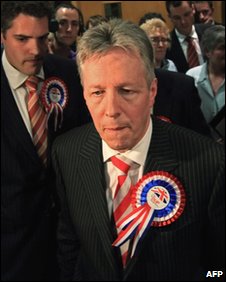 IT’S LUNCHTIME Friday and still no clear answer. The British people have spoken, but in a divided way. The politicians are wriggling to get advantage. After the most exciting election campaign of modern times, it followed the most exciting night of election drama of modern times. The BBC was right there recording all of it and I played a tiny part, writes John Mair in Belfast. END_OF_DOCUMENT_TOKEN_TO_BE_REPLACED